As a leading trading partner, we offer opportunities to transact in

From documentation to execution and delivery, we complete the process from beginning to end.

Our strategies are as unique as your organization.

The security of working with one of the strongest rated banks in the industry.

Carbon trading is growing rapidly as a market approach to reducing greenhouse gas emissions.
Here is what you need to know.

What is Carbon Emissions Trading?

Carbon emissions trading is a market-based method for reducing global greenhouse gases. Carbon trading in the European Union was a result of the Kyoto Protocol – a protocol created by the United Nations Framework Convention on Climate Change (UNFCCC) aimed at fighting global warming. The idea was to create a system to control worldwide emissions based on working principles that are similar to other commodity markets. This approach lets countries reduce pollution with a cap and trade system that operates through regulated markets.

Many other jurisdictions around the world have adopted a similar approach to reducing greenhouse gases. These include RGGI and California/Quebec programs in North America.

With the goal of reducing carbon emissions over time, a cap is set by a governmental body or regulatory agency. A cap is a specific amount of carbon dioxide (or equivalents) that companies and industry sectors are allowed to emit each year. Governing bodies issue permits in the form of allowances for companies to submit against their caps. These allowances are disseminated to the market either through a direct allocation or through an auction. Proceeds can be distributed back to the consumer or used to promote low carbon technologies.

Companies emitting under their annual allowance can trade unused credits to another organization. Conversely, companies with excess emissions can buy extra credits in the marketplace to cover their obligations.

Each allowance permits an entity to emit one tonne of carbon dioxide equivalents. These allowances are tradable commodities. For instance, if a company reduces its carbon pollution output below the cap, it can sell its unused allowances to a company that hasn’t done so well in reducing emissions. Market dynamics of supply and demand determine the price of allowances.

For instance, if a company has a cap of 90 tonnes but emits 100 tonnes, it has one of three options:

Conversely, a company emitting 10 tonnes below its cap can trade its extra 10 credits in the market. 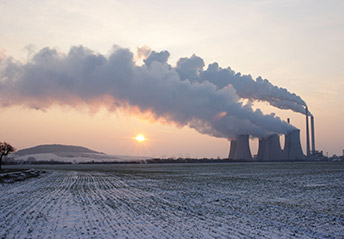 Organizations may be compelled to participate in a regulated carbon program or may choose to participate in a voluntary one. Regulated programs are based on government regulations and policies, compelling organizations to fulfill their annual cap obligations. Voluntary programs act in a similar way, but they function outside of government oversight. Why have companies been motivated to engage in voluntary carbon markets? The reasons are varied but they include:

Company in North America has carbon compliance needs at its plant in Europe.

Company determines that it has to buy 100,000 EU Allowances (EUAs) in order to comply in this compliance year.

RBC completes an OTC sale of spot EU Allowances and sends the Company a contract for the trade.

A California power producer has California Carbon Allowances (CCAs) in its account from previous purchases but does not need to surrender them for compliance until the following year.

The company would like to free up capital for other reasons by utilizing these CCAs.

The power producer would enter into an agreement with RBC to sell its spot allowances now and purchase them back at a future date prior to when they need them for compliance. This works out for the company if the implied rate for this spread trade is lower than the company’s internal cost of capital.